There are several years' worth of setting up the Edimax EW-7811N Wi-Fi adapter on a Raspberry Pi B on the internet. By now (2017) most of it is out of date and wrong. Last week, I wasted several hours trying to make WPA2 authentication work on my Raspberry Pi B. Hopefully this guide will save someone (or future me) some time. 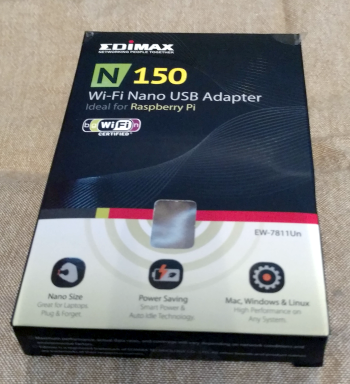 Roll back any changes you have made to the /etc/network/interfaces or /etc/wpa_supplicant/wpa_supplicant.conf files. I usually make .bak copies of config files before I make changes. However, if you did not make backups of these files, the contents of each original file is below.

Additionally, I had installed WICD at some point while trying to configure the adapter. WICD will eat up to 5% of CPU in idle so you will want to uninstall it if you journeyed down the same rabbit hole I did...

Before continuing (and wasting more of your precious time) RESTART your Pi (sudo reboot or sudo shutdown -r now). I probably wasted another 30 minutes with a working solution because I hadn't restarted...

Make sure the Wi-Fi adapter is plugged in and showing via the lsusb command:

The Wi-Fi adapter should be show as "Edimax Technology Co..." as per above. If it is not showing up, try unplugging and plugging in the adapter and/or restarting.

To set up WPA2 authentication, you will only need to edit the /etc/wpa_supplicant/wpa_supplicant.conf file. Edit this file with the following:

At this point restart your Pi.

Once your Pi has restarted fully, run the ifconfig command to confirm your adapter is getting an IP address. The wireless link should be next to wlan0 or wlan1 in the dump:

After this change, restart your Pi again.

I you found this guide helpful and hopefully it saved you some time! Until next time - happy coding!